Structural Equation Modeling in R for Ecology and Evolution

Path (or regression) coefficients are the inferential engine behind structural equation modeling, and by extension all of linear regression. They relate changes in the dependent variable \(y\) to changes in the independent variable \(x\), and thus act as a measure of association. In fact, you may recall from the chapter on global estimation that, under specific circumstances, path coefficients can be expressed as (partial) correlations, a unitless measure of association that makes them excellent for comparisons. They also allow us to generate predictions for new values of \(x\) and are therefore useful in testing and extrapolating model results.

In models with more than one independent variable (e.g., \(x1\), \(x2\), etc), the coefficient reflects the expected change in \(y\) given the other variables in the model. This implies that the effect of one particular variable controls for the presence of other variables, generally by holding them constant at their mean. This is why such coefficients are referred to as partial regression coefficients, because they reflect the independent (or partial) contributions of any particular variable.

Unstandardized coefficients also reflect the phenomenon of interest in straightforward language. Imagine telling someone that 1 standard deviation change in nutrient input levels would result in a 6 standard deviation change in water quality. That might seem impressive until it becomes clear that the size of the dataset has reduced the sample variance, and the absoluty relationship reveals only a very tiny change in water quality with each unit change in nutrient levels. Not so impressive anymore.

Standardized effects, on the other hand, are useful for comparing the relative magnitude of change associated with different paths in the same model (i.e., using the same dataset). Care should be taken not to interpret these relationships as the ‘proportion of variance explained’–for example, a larger standardized coefficient does not explain more variance in the response than a smaller standardized coefficient–but rather in terms of relative influence on the mean of the response.

By extension, standardization is necessary to compare indirect or compound effects among different sets of paths in the same model: for example, comparing direct vs. indirect pathways in a partial mediation model. This is because those pathways could be measured in very different units, and their relative magnitudes might simply reflect their measurement units rather than any stronger or weaker explanatory power.

In contrast, comparing the strength of indirect or compound effects across the same path in different models requires unstandardized coefficients, due to the issue of different sample variances raised above. Comparing the same path across different models using standardized coefficients would require a demonstration that the sample variances are not significantly different (or alternately, that the entire population has been sampled).

Thus, both standardized and unstandardized coefficients have their place in structural equation modeling. Let’s now explore some of the different forms of standardization, and how they can be achieved.

This standardization can also be achieved by Z-transforming the raw data, in which case \(b\) is already the (partial) correlation between \(x\) and \(y\).

Both lavaan and piecewiseSEM return scale-standardized coefficients. lavaan requires a different set of functions or arguments, while piecewiseSEM will do it by default using the functions coefs. coefs has the added benefit in that it can be called on any model object, and thus has applications outside of structural equation modeling.

The interpretation for the coefficient would then be the expected proportional shift in \(y\) along its range given a full shift along the range of \(x\).

At first, this might seem like a strange form of standardization, but it has some powerful applications. For example, consider a binary predictor: 0 or 1. In such a case, the relevant range-standardized coefficient is the expected shift in \(y\) given the transition from one state (0) to another (1). Or consider a management target such as decreasing nutrient runoff by 10%. Would reducing fertilizer application by 10% of its range yield a 10% reduction in runoff? Such expressions are necessarily the currency of applied questions.

Perhaps the best application of relevant ranges is in comparing coefficients within a model: rather than dealing in somewhat esoteric quantities of standard deviations, relevant range standardization simply asks which variable causes a greater shift in \(y\) along its range. This is a much more digestable concept to most scientists. It may even provide a more fair comparison across the same paths fit to different datasets, if the ranges are roughly similar and/or encompassed in the others. Restricting the range may be a useful solution for comparing coefficients across models fit to different data, as long as the range doesn’t extend beyond that observed in any particular dataset.

For a worked example, we have now entered fully into the realm of piecewiseSEM–it does not appear as if lavaan has integrated this functionality a of yet. Let’s attempt to scale the results by hand, then compare to the output from coefs with the argument standardize = "range":

Both scale and relevant range-standardization only apply when the response is normally-distributed. If not, we must make some assumptions in order to obtain standardized coefficients. Let’s start with binomial responses.

Binomial responses are those that are binary (0, 1) such as success or failure, present or absent, and so on. What is unique about them is that they do not have a linear relationship with a predictor \(x\). Instead, they are best modeled using a sigmoidal curve. To demonstrate, let’s generate some data, fit a binary model, and plot the predicted relationship:

Clearly these data are not linear, and modeling them as such would ignore the underlying process. Instead, as you can see, we fit them to a binomial distribution using a generalized linear model (GLM).

Basically, the link functions take something inherently non-linear and attempts to linearize it. This can be shown by plotting the predictions on the link-scale:

Note how the line is no longer sigmoidal, but straight!

For binomial responses, there are two kinds of link functions: logit and probit. We’ll focus on the logit link for now because it’s more common. With this link, the coefficients are in units of logits or the log odds ratio, which reflect the log of the probability of observing an outcome (1) relative to the probability of not observing it (0).

Often these coefficients are reverted to just the odds ratio by taking the exponent, which yields the proportional change in the probablity observing one outcome (1) with a unit change change in the predictor.

The problem is that (log) odds ratios themselves are not comparable across models, and it’s unclear how they might be standardized, since the coefficient is on the link (linear) scale, while the only variance we can compute is from the raw data, which is on the non-linear scale. Thus, we need to find some sway to obtain estimates of variance on the same scale as the coefficient. 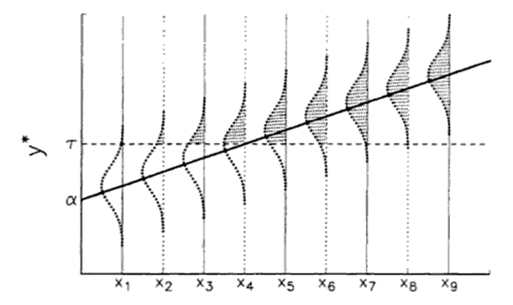 This linear but latent (i.e., unobserved) variable, which we call \(y^*\), is therefore related to the observed values of \(x\) through a vector of linear coefficients \(\beta\) as in any other linear model:

The problem is, we can never observe this linear underlying or latent propensity, and so we must approximate it. At some value of \(x\), this probability is evenly split at 50/50: we call this cutpoint \(\tau\). Below \(\tau\) we are more likely to observe 0 in our example, while above \(\tau\) we are more likely to observe 1. We can relate \(y\) to \(y^*\) based on whether the observed values fall above or below this cutpoint.

Regardless of the type of standardization, we need to know about the range or variance of the response. With our knowledge of \(y^*_{i}\) and the theoretical error variances, we have all the information needed to compute the variance on the link (linear) scale.

The variance in \(y^*\) is the sum of the variance of the predictions (on the linear scale) plus the theoretical error variance. For a logit link, then:

The square-root of this quantity gives the standard deviation of \(SD_{y^*}\) on the linear scale for use in scale standardization, or alternately, the range of \(y^*\) to use in relevant range standardization.

This method, called the observation-empirical approach, does not require the acknowledgement of any latent variables or theoretical error variances, but does require an acceptance of this is a valid measurement of \(R^2\) (which some consider it not, as GLM estimation is based on deviance, not variance, and thus this statistic is not equivalent). It also does not provide a measure of the range of \(y\) although we can assume, based on sampling theory, that is \(6 * \sigma_{y}\).

We see that both approaches produce coefficients, and they are the same as returned by the coefs function in piecewiseSEM (with the appropriate argument).

You’ll note that the observation-empirical approach yields a smaller coefficient than the latent-theoretic. This is because the former approach is influenced by the fact that it is based on the relationship between a linear approximation (predictions) of a non-linear variable (raw values), introducing a loss of information. The latent theoretic approach also suffers from a loss of information from use of a distribution-specific but theoretically-derived error variance, which may or may not approach the true error variance (which is unknowable). Either way, both kinds of standardization are not without their drawbacks, but both provide potentially useful information in being able to compare linear and now linearized standardized coefficients.

4.5 Scaling to Other Non-Normal Distributions

As it turns out, the latent-theoretic approach has one further benefit: we can extend it to other distributions (as they all have their own described theoretical error variances), and mixed-effects models that introduce another source of random variation.